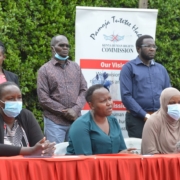 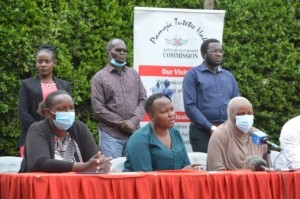 On 19th October 2020, the Nubian Rights Forum, alongside Centre for Minority Rights Development (CEMIRIDE), Haki Centre, Haki na Sheria Initiative, Kenya Human Rights Commission and Defenders Kenya – Coalition held a joint press briefing to issue a press statement on ‘Huduma Namba’ as titled above. Prior to the joint press, the partners have been working to educate communities on Huduma Namba some of whom still remain clueless on what Huduma Namba is about. Perhaps this serves as an indicator of how poorly the project has been coordinated from onset because there is minimal public awareness and public participation. The press statement followed after the Kenyan government through a special issue of the Kenya Gazette on 13TH October 2020 released new rules and regulations yet the issued regulations still do not address the issue of the risks of exclusion in NIIMS, and the regulations also fail to satisfy the court conditions to be fulfilled before the government can move forward with the Huduma Namba.

The Nubian Rights Forum has been very vocal on the Rights of Minority groups, especially communities at Risk of Statelessness. The Nubian community for example, due to the vetting regulations imposed on the community has numerous cases of delayed issuance of Identification cards or lack of vetting due to request for inaccessible documents. The government recently came up with the Huduma Namba that would see a joint card issued to Kenyans, and this card would be prerogative to getting social services. The civil society saw this as a malicious move by the government that would lock out communities that do not have national identification cards – because for one to register they must have identification cards. The process in itself fell short because despite asking for a lot of personal, and sensitive information, there was no data protection act issued. It also did not include steps that would ensure the inclusivity of minority communities and communities at risk of statelessness who did not have identification cards. Despite the government being aware of communities who have not been issued with identification cards, they still began the implementation of the process, and it took a coalition of partners to use litigation means to ensure the government follows due procedure in issues that carry a lot of national weight. 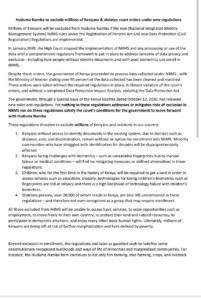 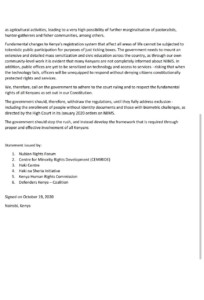 We found this press statement to be very important because we constantly need to remind the government that Kenya is bigger that a few individuals. The primary mandate of any arm of the government is first to represent and actualize the interests of ALL citizens without discrimination on ethnic lines, religion, age and other demographics. The Kenyan government, however, has been extremely notorious for coming up with projects such as the NIIMS program without following all due procedures before implementations. The programs have either lacked public awareness and public participation, regulations and acts, as well as inclusive policies. The press briefing addressed the issues of four main groups of people

The press statement was issued to multiple media houses, we look forward to actionable and tangible responses from the government that will respond to the risk of exclusion, cases of discrimination and the need for fully inclusive and sustainable policies for all people.